We opened a pulse survey on 1 September 2020. This is the second survey run in 2020 with a focus on the impact of COVID-19 on businesses.

There were 340 responses to the survey.

Results should be treated with caution. They are not representative of all businesses due to the sampling methods.

The target audience for the survey was employers. The Institute reached out to employers through:

There were 340 responses to the survey. Based on the direct email contacts with trailblazers, T Level panel members and the Small Business Forum members, this is a response rate of 7%. This does not consider the other types of communication, so the actual response rate will be lower. Multiple respondents may be from the same organisation.

Findings from the pulse survey are unweighted and should be treated with caution when used to assess the impact of COVID-19 across the economy. Each response was given the same weight regardless of size, sector and the number of apprentices they have.

There are potential biases that could impact how representative the results are, including:

Figure one shows the engineering, construction and manufacturing sectors had the most responses in this survey, with just under half of the responses from these three sectors. Three sectors had under 5 responses: hospitality and catering, ICT, and leisure and travel. 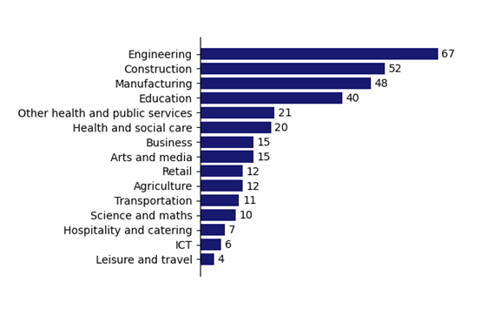 In some of the tables, results are grouped as ‘other sectors’ to avoid disclosure of information about respondents, for example where the number of respondents is under five.

Even with the potential bias and small sample size, the survey gives a useful view of the experience of the 340 respondents.

Respondents were asked about apprentices they currently employ. 275 respondents had apprentices in their organisation at the time of the survey.

78% of respondents said most of their apprentices are doing off-the-job training, compared to 62% of respondents in the June survey. This is mostly through distance learning.

The percentage of employers stating the majority of apprentices are on furlough was 17%, compared to 29% in the first pulse survey.

Table 1 shows the responses across categories. A respondent could select more than one choice, so the percentages do not add up to 100%. For example, apprentices could be furloughed and also be continuing off-the-job training.

Table 1:  Responses to the question “Which of these categories apply to the majority of your apprentices?”

Source: Supporting table T2 and June 2020 T2. Survey question:” Which of these categories apply to the majority of your apprentices?”

The differences between sectors could be due to differences in COVID-19 impact or response bias.

Sectors are grouped into ‘Other sectors’ where individual sector responses were too few to allow individual reporting. The other sectors for Table 2 and 3 are:

Table 2:  Sector breakdown of respondents saying the majority of their apprentices are continuing with off-the-job training

Source: Supporting table T3. Survey question:” Which of these categories apply to the majority of your apprentices?”

There is also variation by sector in the percentage of respondents saying most of their apprentices are furloughed, as shown in Table 3. Again, these differences should be interpreted with caution due to potential bias.

There is also variation by sector in the percentage of respondents saying most of their apprentices are furloughed, as shown in Table 3. Again, these differences should be interpreted with caution due to potential bias.

Table 3:  Sector breakdown of respondents saying the majority of their apprentices are furloughed

Source: Supporting table T4. Survey question:” Which of these categories apply to the majority of your apprentices?”

When asked to estimate recruitment over the next 12 months, 57% of respondents said they plan to recruit new employees as apprentices compared to 14% saying they would not. Again there was some uncertainty, with 29% saying they did not know.

Table 5: Recruitment of new employees as apprentices in the 12 months from September 2020

Source: Supporting table T7. Survey questions: “Do you plan to recruit apprentices as new employees in the 12 months from September 2020?”

Other support includes, but is not limited to:

Responses indicate that awareness varies amongst these employers about the different government support available. The job retention bonus was the most well-known by the respondents, with 87% aware. This was followed by the apprenticeship incentive payment, with just over three-quarters of respondents being aware of this support. This was slightly higher than the awareness of the Kickstart scheme (67%), changes to the break-in learning rules (61%) and the traineeship incentive payment (59%).

Source: Supporting table T8. Survey questions: “Before this survey were you aware of any of the following government interventions?”

Source: Supporting table T9. Survey question: "Do you agree with the following statements: 'I feel confident that I understand the eligibility requirements for the new apprenticeship payments'"

This same group of respondents, who were aware of the apprenticeship incentive payment, were asked if the financial incentives for employers would likely increase their recruitment of apprentices. The 75 respondents who were not aware of the payments before the survey were given a brief introduction to the support package and asked if the financial incentive might increase their recruitment of apprentices.

Table 8: Impact of government support on recruitment plans in the next 12 months. Split by those aware or unaware of the apprenticeship payment before the survey.

Table 9: The potential impact of a higher apprenticeship payment for people under the age of 25

Source: Supporting table T12. Survey question: "Do you agree with the following statements: ‘My organisation is likely to recruit younger people as a result of the additional incentive for apprentices under the age of 25’”

Table 10: The potential impact of financial incentives on apprenticeship recruitment

Source: Supporting table T13. Survey question: "How many additional apprentices do you think you will recruit because of the financial incentives?"

Survey findings will be used by the Institute to inform COVID-19 work and this published summary will be shared with the Department for Education and Education and Skills Funding Agency.

The Institute intends to run more pulse surveys in future to gain further employer feedback about the support needed and challenges faced because of COVID-19.

For future pulse surveys, we will look at ways to improve the number of responses and representation. Since the June survey, there has been increased engagement with professional bodies in this research and this will continue for future surveys to try to reach more respondents across sectors.