The methodology for running this survey should be considered when interpreting these findings before drawing any conclusions (see methodological considerations section).

The key findings from this are:

The sample was self-selected. Participants had to actively seek out and take part in the survey rather than being randomly selected and approached. These results are therefore not representative of all apprentices. There will be non-response bias in the findings. Those that did not participate are likely to have differing views than those who did respond. We do not know the extent to which opinions may vary. However, it is reasonable to conclude that those who do not know that they are on an apprenticeship, which may be because they have not signed a commitment statement, or do not receive any training, or both, are unlikely to have self-selected to have taken part in this survey.

The results here are therefore more favourable in terms of levels of training and satisfaction. The latest apprenticeship evaluation learner survey, which has a more robust sampling process, found that just 30% were getting the minimum requirements of formal training. Note, formal training has a slight definition difference to off-the-job training but it is considered a close proxy. It is not clear if it is an under or overestimation of off-the-job training. Further detail on this can be found in the apprenticeship evaluation survey technical report.

Further to this, the weighting has not been applied to counteract over/underrepresentation of certain demographics in this survey compared to the population of apprentices. The sample is therefore not representative based on the characteristics of the apprenticeship programme.

We have assessed the differences between the sample and the wider starts population for route, level or employer size which can be seen below. We have compared responses to the survey with starts on apprenticeship standards in 2018/19, for route, region and level.

For employer size, we were only able to compare to starts on frameworks and standards combined. A better comparison would be to compare to participation in the programme rather than starts, however, this data was not publicly available.

We did not collect data on other characteristics which may too have an impact on the apprenticeship experience. These could include but are not limited to age, prior employment with the same employer or prior knowledge of the occupation.

The proportion of survey responses by route does not match the proportion of apprenticeship starts by route in the last academic year (2018/19). There is a much higher relative response rate from within the engineering and manufacturing route and a lower response rate from within the care services route. This may be due to the impact of COVID-19 as the survey was run during the pandemic, as discussed further below. 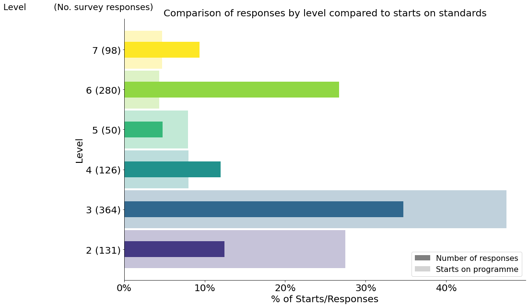 The majority of respondents are on apprenticeships with large employers. This represents a response bias in favour of apprentices employed by large employers. It should be noted, however, that this comparison uses data for frameworks and standards rather than just standards. This because we must use the individualised learner record (ILR) dataset matched to the Inter-departmental business register (IDBR) to obtain the employer size. This is only available at an aggregate level. 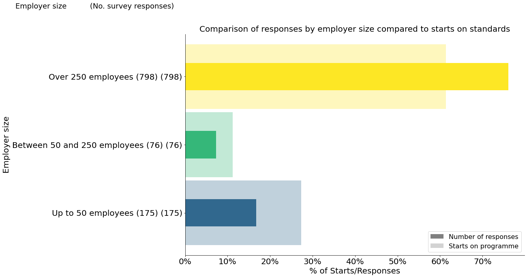 Source: Apprenticeships in England by industry characteristics - starts on standards and frameworks in 2018/19 excluding a small number that reported the employer size as 'unknown' which have been matched to the IDBR; and responses from the survey

The South East and West Midlands had higher responses proportionally compared to starts in 2018/19. Additionally, Yorkshire and the Humber, the East of England and London were under-represented. 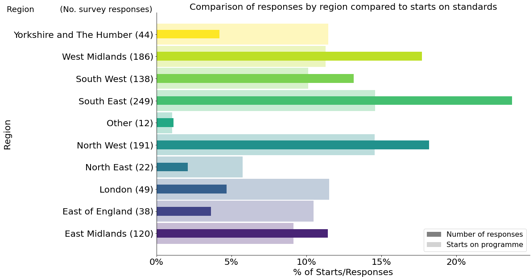 As this survey collected data when the COVID-19 pandemic was occurring, this may have impacted apprentices’ experiences. Additionally, COVID-19 is likely to have impacted the survey response demographics.

The following section provides a summary of responses, grouped into themes of questions.

Respondents were asked questions around the documents that they should have seen, read or signed. This found:

In the survey, respondents were asked if they received off-the-job training.

These findings are more favourable compared to the latest apprenticeship evaluation survey. This could in part be due to when the survey was carried out as there is a lag in reporting on the apprenticeship evaluation survey. However, the self-selected sampling approach used in this survey is likely to explain much of the difference because those receiving little or no training may not know they are on an apprenticeship and are therefore unlikely to take part in this survey and therefore these results may present a biased view.

Further to this, the questions around training are asked very differently in this survey compared to the evaluation survey. Respondents were simply asked:

‘Do you receive off-the-job training’, with the following options:

The evaluation survey calculates the proportion of hours in training and worked hours. The training hours are based on the number of hours training at an external provider and training at the workplace away from their regular work activities.

The apprentice panel survey then asked about satisfaction with training. Around two-thirds of respondents were generally satisfied when asked about their training content and training plans as seen in the figure below. The questions asked were:

How satisfied are you that your training is delivered via high quality including training delivered by both your employer and any training provider?

It is important to note, however, that respondents were not given full descriptions of what is considered ‘on-the-job’ and ‘off-the-job’ training at the time of questioning. This may have led them to draw their own conclusions. For example, they may have drawn the distinction as ‘training at the provider’ vs. ‘training at the workplace’ which is not correct.

Respondents were asked questions about how relevant their apprenticeship has been in terms of learning the right skills and setting them up for their career. At least 80% of respondents were either very satisfied or satisfied with each of the following questions:

Almost two-thirds of respondents (62%) stated that the duration feels about the right amount of time to be ready to take the end-point assessment (EPA). Similarly, 63% stated that this duration reflected the amount of learning to be fully occupationally competent. For both questions, around 10% did not feel it was long enough and the remaining responded that it was ‘more than enough time to do the learning required’.

Three-quarters (75%) of respondents stated that they were either 'satisfied' or 'very satisfied' that they are able to gain access at work to all the experience necessary to complete their apprenticeship training. A further 16% were neutral and 8% unsatisfied or very unsatisfied.

Of all respondents, 38% did not know who their end-point assessment organisation (EPAO) is. However, 93% of respondents reported they either definitely or are likely to take their EPA. Apprentices nearing gateway should be aware of who their EPAO is and the EPAO is expected to engage with the apprentice to prepare them for EPA. Within this survey, however, it is not possible to identify where in an apprenticeship the respondents are.

The majority (87%) of respondents said that they would recommend their apprenticeship to other people wanting to train in their occupation.

When asked if the COVID-19 outbreak was having significant impacts on their apprenticeship, over half (58%) of respondents reported that it had. As noted in the methodological section, caution should be used when interpreting these findings as we do not fully understand the impacts of any sampling bias.