The apprentice panel survey is a survey of apprentices run by apprentices. It was designed and developed by IfATE’s apprentice panel, an advisory group of current apprentices who represent a range of sectors, levels, ages, and areas of the country. The panel shaped the survey to cover the themes that were most important and meaningful to them.

As well as designing the survey, panel members also offered their own interpretations of the survey results, providing valuable context and insight. Summaries of these insights are included in boxes throughout this report.

The survey was conducted online and was distributed through a range of channels, including social media, email lists, and events. 2,016 apprentices responded. The survey data provides a focused look at this snapshot of the apprentice population, and the involvement of the panel offers the potential to generate unique insights. However, the approach used means the survey is not representative of all apprentices and results should not be generalised beyond those who responded.

As part of the analysis of the results, we explored whether there were differences between different groups of apprentices. We broke down the responses by gender, age, ethnicity, religion, sexuality, disability status, apprenticeship level, occupational route, employer size and region of England. Notable differences between these groups are reported throughout.

For the purposes of this analysis, occupational routes were clustered according to IfATE’s internal route groups. These are arranged as follows:Engineering, construction and transport covers the engineering and manufacturing; construction; and transport and logistics routes.Business services covers the business and administration; digital; legal, finance and accounting; sales, marketing and procurement; and creative and design routes.People services covers the agriculture, environmental and animal care; health and science; care; catering and hospitality; education and childcare; hair and beauty; and protective services routes.

All percentages in this report are rounded to the nearest whole number. This means that reported individual percentages may not sum exactly to reported combined percentages.

Further details about the methodology used for survey development and analysis can be found in the accompanying Technical Annex.

68% of respondents agreed that their workloads as apprentices were manageable. Apprentices under 22 were more likely to say they had a manageable workload (75%) as were those who worked at an SME (75%). Those undertaking apprenticeships at level 6 and 7 were less likely to agree (54%). 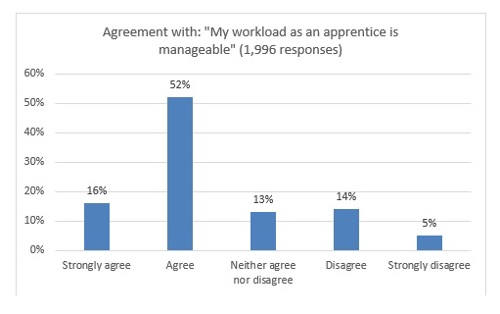 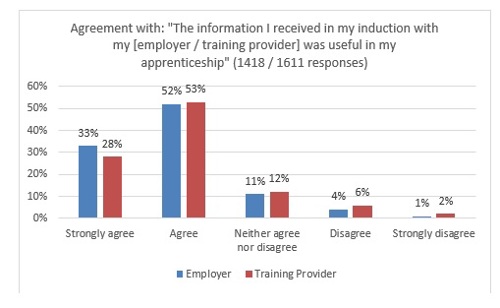 Only 30% of apprentices said that they had received information at their induction on how to connect with external apprenticeship networks.

Apprentice panel insights – apprenticeship networksWhen designing the survey, the panel felt it was important to understand how many apprentices received information that allowed them to connect with external apprentice networks for advice and support.Panel members were generally unsurprised by the result that relatively few apprentices (30%) recalled receiving this information as part of their induction.Discussing their own experiences in relation to the results, some panel members said that they were members of existing networks, and as with the survey respondents, many of these had found them independently, rather than being pointed to them by their employer or training provider. One panel member, feeling a lack of support from their organisation, had even set up their own network.Others said that their employer offered internal networks, and that these provided sufficient support for them during their apprenticeships, and they therefore would not have needed an external network. Some of these internal networks were specifically targeted at apprentices, while others were based around other issues (eg, staff disability networks).Another panel member highlighted the value of online networks, such as LinkedIn, and that line managers had encouraged them to access these.

Most apprentices said they were learning skills, knowledge, and behaviours (KSBs) that were up to date (90%) and that would benefit them in their future careers (89%).

90% of apprentices felt they were learning transferable workplace skills that they could use in other roles.

Most apprentices (83%) felt they got opportunities in the workplace to practice and develop the skills they were learning in training. Again, apprentices under 22 were more likely to feel positive about this (89%), while disabled apprentices were less likely to say they had these kinds of opportunities (69%). 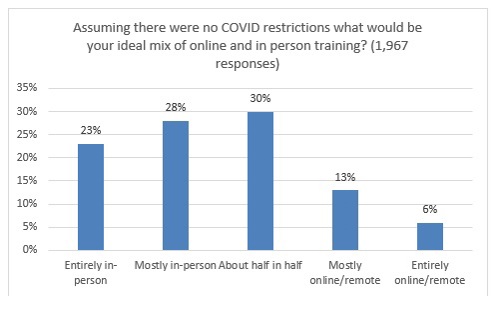 Overall, only 19% of apprentices said they wanted to learn either mostly or entirely online. However, some apprentices were more likely than others to want to learn online. Female apprentices (25%) and those aligned to the business services route group (38%) were more likely to want most or all of their training online. Apprentices under 22 (15%) and aligned to the engineering, construction and transport route group (4%) were less likely than average to want online training.

Apprentice panel insights – learning remotelyWhen discussing the results, panel members’ views were mixed on learning online. Some panel members said that focusing while learning online was difficult, while others saw learning at home as a helpful contrast from jobs where they were expected to be in the office, or as a way to learn at their own pace. One said they felt they were learning all the “in person” skills they needed while at work, so that it was more efficient to do their more formal learning online.Some panel members felt that the specific balance of online and in person study was less important, and that trying to specify a recommended balance for all apprentices was not appropriate. Instead, they argued that it was more important that individual apprentices were provided clarity when choosing a particular apprenticeship about what balance of online and in-person learning they could expect. 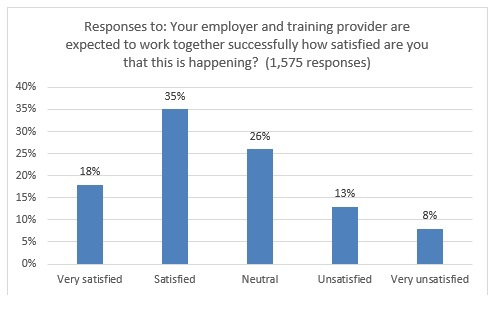 Apprentices at level 6 and 7 (57%) were less likely to be satisfied with the overall quality of service received. Engineering, construction and transport apprentices were less positive both about the overall service (57%) and responsiveness (53%).

Apprentices were asked if they knew what their apprenticeship standard was. 80% of those who gave a substantive answer (ie “Yes” or “No”) said Yes, however this reduced to 62% when “not sure” responses were included in the analysis. Apprentices aligned with the business services route group were more likely to say they did know what their standard was, with 87% of those who gave a substantive answer saying that they did.

Apprentices generally felt that their standards presented the right level of challenge, with 78% saying the level of challenge was appropriate, and only 16% and 7% saying it was too hard, or too easy, respectively. 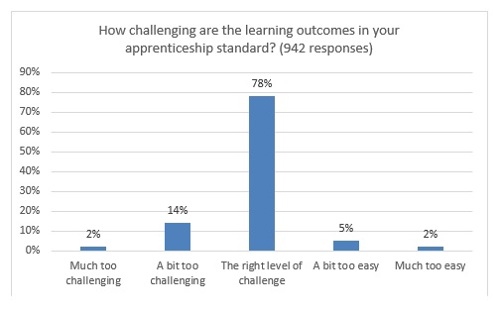 Of the 1,121 apprentices who said that their apprenticeship included a mandatory qualification, 82% thought it would be valuable for their future career.

Apprentices mostly said they felt empowered to have successful careers in their industry (80%) and said that their apprenticeships specifically had made them feel more empowered (78%). Apprentices under 22 were more likely to report feeling empowered (85%).

About half of apprentices (52%) had considered future training or qualifications towards a different career path than the one they were currently on. Apprentices under 22 were more likely to say that they had considered this (60%). 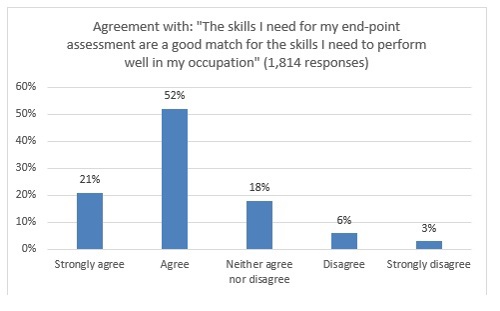 243 apprentices said they had passed through their apprenticeship gateway. These apprentices were asked about the support they had received towards their end-point assessment.

Press notice: IfATE’s response to the survey of apprentices – October 2022